Skip to content
This is a piece written for an assignment for my second-year subject Press and Society at La Trobe University.
It was written in partnership with Nicola Conroy.

JEWELLER Stuart Hughes loves precious metals and dinosaur bones. So much so that 100 000 kilograms of gold and platinum was used to make the world’s most expensive yacht, the History Supreme. Sold to an anonymous Malaysian businessman in July last year for $4.5 million, the story and supplied pictures ran in major newspapers across the world.

Except, it was just that: a story. Stuart Hughes is a con-man, adapt in the art of Photoshop and public relations. With no more than a clever press release, Hughes pulled the wool over the eyes of some of the world’s biggest media outlets. 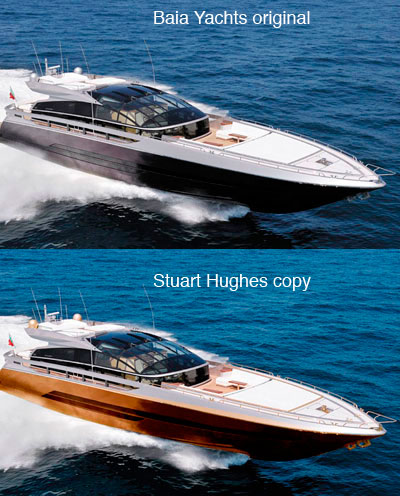 Once the story ran in the British nationals (here, here and here), credibility had been established, giving the Wall Street Journal, Ireland’s The Journal, Toronto Sun, Malaysia Star and many others the chance to print the fabrication. Even Sydney’s Daily Telegraph printed it and as of writing, its online sibling, News.com.au, continues to publicly display its piece on the History Supreme.

According to a study in 2010 by Crikey and Sydney’s University of Technology, up to 77 per cent of technology and innovation newspaper articles are influenced by public relations. More startling is the note that more than half have “no significant journalism work done”.

In the case of the History Supreme, seemingly only Stewart Campbell, writer for the UK’s Motor Boat & Yachting, questioned the authenticity of the golden boat. It took one phone call to the alleged manufacturers – in which they denied having any knowledge – for Campbell’s suspicions to come true.

Serious errors of fact in the press release were not questioned by the dozens of news outlets to run the story. How can a 30m boat, covered in so much gold, float when its water weight is near that of a cruise liner? Was Stuart Hughes aware he was selling a yacht for more than a billion dollars less than what the gold and platinum was worth?

Increasingly, the media has become dependent on public relations, particularly in its ability to produce news quickly and straight from the source. For example, the marketing of the iPad through news services makes the Apple product a must-have for many consumers. Apple’s PR team controls what information gets out and makes sure this information is shown in a good light.

Jessica Pattison from public relations company MKT Communications says PR is able to supply journalists with content they otherwise would not know about.

“PR is critical to the media industry. It is through PR that journalists are able to be made aware of news stories and also given access to key players within organisations,” she says. “PR professionals make the task of wanting to interview someone to make a story credible that whole bit easier.”

For Pattison, PR companies are important in making sure a company’s message reaches the right people.

“Whether it’s a hard news topic that needs to be told or a lifestyle/feature piece to engage and provide some light entertainment, I really believe PR plays an important role in ensuring that a brand’s target audiences are receiving the appropriate and correct information.”

Sometimes a press release can be written so well, a journalist can take it too easy. Evidence of “no significant journalism work” is well served by an article on technology news website iTWire, outlining Telstra’s partnership with James Cameron and his voyage to the deepest sea trench on Earth.

Stuart Corner, the iTWire’s telecommunications journalist, took the opportunity to publish an article 90 per cent derived from a press release.

Unfortunately for readers of a site claiming to be “Australia’s most read independent technology news source”, Corner’s small contribution to the article was factually incorrect, stating Cameron’s dive to the bottom of the Marina Trench was the second ever – it was the fourth.

Whether it was lazy journalism or a journalist rushing to make a deadline, Corner’s article was sent to the inbox of 16 000 subscribers, without warning they were actually reading a press release.

The iTWire was not the only news site to publish the Telstra press release without attribution. Technology news provider Gizmodo Australia featured a small article outlining the Telstra deal on its website, accompanied by the telco provider’s supplied photo.

Incidentally, Gizmodo has published most, if not all, of Stuart Hughes’ cons as real news stories with solid gold iPads and a diamond encrusted iPhone 4 (with free ostrich feet case) two of the more ridiculous ones.

British journalist and Journalism.co.uk’s technology correspondent Sarah Marshall believes in her company’s policy to state when an article substantially relies on a press release.

“If we run a story from a press release, we always state that it is from a release. If the story is entirely from the release, we prefix the headline ‘Media Release’,” she says.

Because of the media’s reliance on PR, Marshall says journalists are often too worried about the damage to their relationship with companies.

“Journalists feel that if they slate Facebook, for example, they may not be invited to the next event or be informed of future news lines.

“I can hand on heart say I have never and would never avoid writing a bad news story on any company in order to maintain a relationship,” says Marshall. However, that does not mean it doesn’t play on her mind.

“We put on events so I am also mindful of the relationships with some companies, in case I want to encourage them to take part or sponsor a future conference.”

“Tech companies are clearly pumping money into PR and it is proving cost effective,” says Marshall. “I think some journalists are not doing their job. Less so the tech journalists [and] more so those [from mainstream news outlets].”

For Campbell, his investigation into Hughes’ scam showed the eagerness of some journalists to publish attention-worthy articles at the expense of presenting true facts.

“It’s been interesting for me to be so close to the lie and watch it spread through increasingly connected global media, infecting everyone, picking up authority with every newspaper, blog or Twitter feed it touches,” says Campbell. “Credibility through hit results.”

“Soon the lie, like so many others that will never be exposed, becomes fact with the original story drowning out subsequent follow-ups about it being wrong, because the correction is just never as sexy.”

With an impatient public not wanting to wait for news anymore, incidents similar to Hughes’ scam may become more common as blogs and social media sites meet the fast news demand.

Will the quality of news diminish as journalists fighting to be first put their trust in public relations? Only time will tell.