This post also generated a lot of discussion on sports opinion site The Roar. View it here.

Hawk-Eye is far less accurate than it appears and its use needs to be redesigned before it causes more damage.

Since the Hopman Cup first offered the system for decision-review in 2006, Hawk-Eye has overruled umpires countless times in tournaments across the world. Not only has it led to those woeful decisions being fixed, it adds entertainment value to both spectators in the crowd and watching at home. The problem is Hawk-Eye has been guessing close calls more often than it lets on. 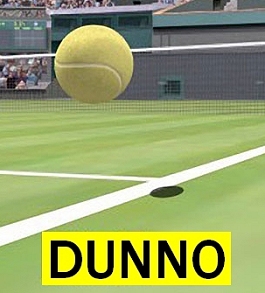 On its website in plain black-and-white, Hawk-Eye Innovations states the system has a mean error rate of 3.6 mm. Such a small margin might not seem much at first, but think of all the balls Hawk-eye decided was out by one, two or 3 mm. It is very possible those balls were in.

It would be hard to pretend tennis administrators do not know of this guesswork but seemingly they do not care that this cost a player the match, the tournament, prize money and the sponsorships that come with good results.

Moreover, administrators seemingly do not care about the damage it is doing to the officials. The computer is placed in a more righteous position than the lines people because it is always shown to be correct. But, as shown by the error rate, it is not.

This lack of a grey area causes flow-on effects to umpires across all courts, not just those with Hawk-Eye. Constantly bombarded with Hawk-Eye evidence that umpires are making errors, players and spectators alike are losing faith in the accuracy of the umpires.

A paper written by sociologists Harry Collins and Robert Evans in 2011 argues that evens when the means of making sound judgement is made available to spectators, ultimate knowledge must always remain with that of the human umpires. Using decision-review systems should be in place to correct blatantly incorrect calls. Close calls, where the system is shown to be guessing, should remain as the human umpire called it.

Cricket is the only other sport that uses decision-review systems as widely and frequently as tennis. Here, the cricket convention of ‘benefit of the doubt’ is integrated into the new system.

The ZU ensures line-ball decisions remain as the umpire called them and the decision-review system only overrules decisions where more than half the ball is shown to hit the stumps.

While cricket uses Hawk-Eye (or any other Reconstructed Tracking Devices such as Eagle Eye) mainly to look at what-would-have-happened, it also applies Hawk-Eye to what-did-happen. Cricket fans will know the ball must both bounce and hit the batsmen in line with both wickets to be given out LBW. The ZU is used in the adjudication of these cases too.

To the compliments of Collins and Evans, cricket’s use of a ZU not only shows viewers the decision-review system is not perfect but also defines what a big mistake is. The system was brought in to correct woeful calls and a big mistake is now defined as anything beyond the zone.

Tennis too made the choice to move Hawk-Eye from television gadget to on-court decision maker to stop the occasional horrible line call. It erred when it forgot to tell everyone the system had flaws.

Humans are far from perfect but so is Hawk-Eye. The problem can easily be fixed with the addition of the Umpire’s Call option, a 4 mm grey-area that will ensure more fairness for all and take tennis on the first steps to rehabilitation.